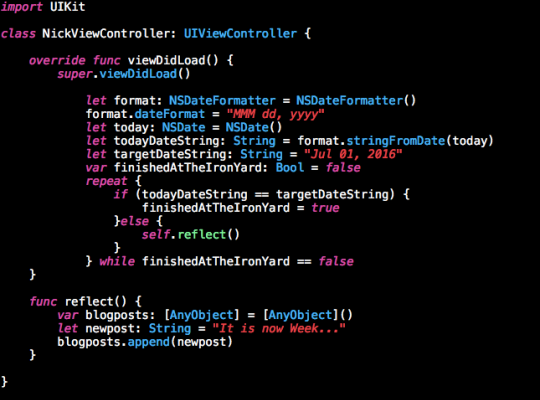 Week 5 is complete and it went by “Swift”ly.  Yes I know, that was a pretty harsh pun to throw at you, but it really did go by fast.

This week started off with our team showcasing the weather app we built over the weekend.  Check out the final product here.

The rest of the week was spent going back over previous apps made in Objective-C and converting them to Swift.  Early in the week my instructor was away and we had the opportunity to get a good introduction to the Swift programming language from Kevin who works with WillowTree.  They make all sorts of apps (iOS and Android) for clients.  Kevin went over the variables and constants as well as arrays, functions, classes, subclasses, and much more.

It was exciting to sit down and code and when you were finished there was so much less to put down on the keyboard compared to Objective-C.  Soooo much less.  It really is a powerful language and I’m looking forward to diving more into it in the weeks ahead.

This weekend I was tasked with re-writing in Swift the OutaTime app that I made in Objective-C.  This app basically was a UI similar to the Time Circuits on the Delorean Time Machine from Back to The Future.  I also was tasked with making a map app that requested the user’s current location and would allow a pin to be dropped to represent that the user’s car was at that same location.  I was able to figure this out and even add that it could trace their route using a polyline.  The only piece of the project I didn’t complete was using NSCoding to save the annotation (pin) to disk.  Hopefully my instructor can help me solve that on Monday.

My final project is approaching soon and I have so many ideas.  My problem will be picking something I can actually accomplish in 4 weeks.  Hopefully with some guidance from my instructor I can get a good handle on which idea I should pursue.

Disclaimer: “Notice that the original code for the name of this blog has been updated to Swift.”

RT @DanRather: Are you kidding me???? I’ve seen a lot of weekends of football. This has been one of the best.
h J R
Follow revdevnick